Wax is now a popular fabric in the world of fashion. It is used for clothing, clothing accessories, but also for interior decoration. Today we will offer you an overview on the textile to the diverse and colorful patterns.

A meeting between Europe and Africa

The wax no longer dresses only Africans. African designers and fashion houses thanks to their originality were able to outsource this tissue around the world. For a long time, the wax was associated exclusively to Africa, to know the history of its manufacture we have to go to Indonesia partly colonized by the Dutch in the nineteenth century. The technique of Javanese Batik helps to fix the different colors. What we know today as the African loincloth takes the name of wax. To share this new fabric to Africans, we relied on the Ghanaian soldiers who went to fight alongside the Dutch colonial forces in Java, Borneo and Sumatra. Back in the Ashanti Kingdom, located in Gold Coast, now called Ghana, the success was immediate. Everyone loves the wax, both aristocrats and people. The reputation of wax crosses borders and spans the entire West Africa and later on the whole world. Today, the manufacture of wax is no longer the exclusive privilege of the Europeans. Many factories have emerged in Africa including Ghana, Benin and Ivory Coast where various ranges of tissues are proposed to make the wax accessible to all budgets. Today, the famous textile that has conquered the heart of Africa is rooted in tradition and is also used as a means of cultural expression. 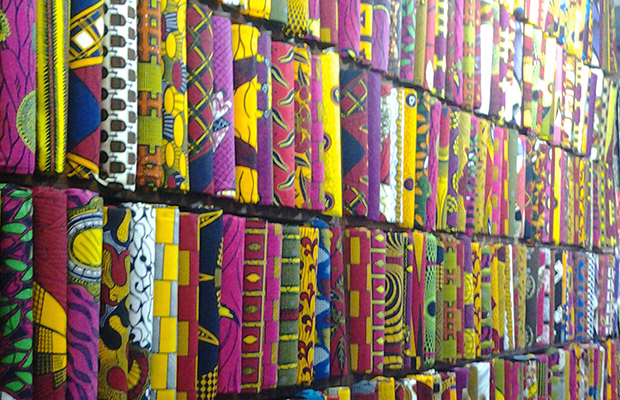 The wax a means of cultural expression

The wax is at the origin of many African proverbs. In Burkina Faso, for example, we say “beard says the day what loincloth says at nigh” or “a woman is recognized from the node of fer loincloth.” This shows the strong and symbolic value of wax in African culture. It is offered as dowry during customary marriages. Moreover, it is not uncommon for members of a group or family, in solidarity wearing the same pattern of wax during important ceremonies such as baptisms, weddings, funeral … For a long time in Africa the making of wax remained sober just to highlight the patterns and colors. The cloth was easily established. Thus a woman wearing superposed loincloths is considered as a married woman while a woman wearing a knotted loincloth is a heart to take. Despite its success, the popularity of loincloth had a slight decline in the 80s with the advent of jeans and t-shirt in Africa. This is the beginning of a new era. Knotted loincloth is neglected in favor of more extravagant models that are now the success of wax. If the way to wear the wax has evolved over the years, African women have always competed ingenuity to name the different models based on patterns.

The way of wearing wax describes its user

“My husband is able,” “You go I go,” “when a woman passes the man passes away,” “the eye of my rival” are all symbolic expressions used by African to name the wax. Many women were seen arguing strongly because they felt “provoked” by the loincloth of another. The beautiful mothers in particular are known to cleverly use the cloth to make a sharp message to their beautiful girls. And men! The poor who have the misfortune to choose without seeking the meaning are constantly paying the price. Some patterns have remained timeless and often reprinted. But in some families, girls have the opportunity to inherit original models that are passed from mother to daughter over generations. The first models were of very rare quality.

You have adopted the wax and you use it in its several aspects? Find our selection of products designed with wax. Decoration jewelery, bags, clothes, shoes … you will be spoiled for choice at AwaleBiz.